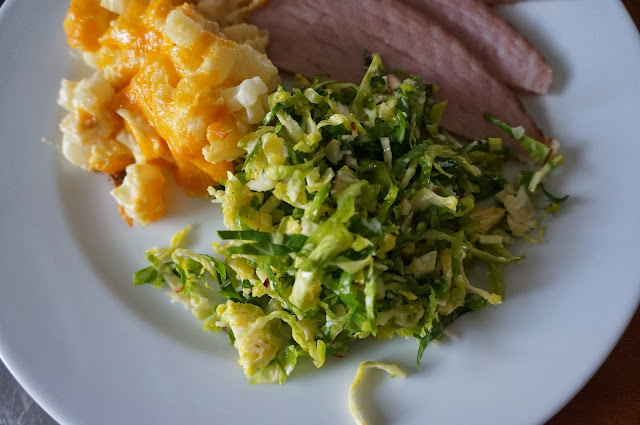 Please just pretend to ignore the mound of cheesy potatoes in the picture above and instead focus on the brussels sprout salad in the lower right hand corner. It is equally as good and far more likely to make the menu cut now that we have entered the new year.

Like a more elegant cousin to cabbage, brussels sprouts are good both roasted and shredded in a salad. I would argue shredded brussels sprouts hold their own a bit better in a salad and do not wilt quite as much. The result is plenty of crunch factor to enjoy.

I love to buy brussels sprouts on the stalk- it is like a bit of theater in the produce aisle to see them stacked up on one another. As common as they have become, during my last grocery store checkout, the customer behind me politely asked what it was I was purchasing. This led to a whole discussion on brussels sprouts and how best to cook them. (I always like it when food helps us connect to one another).

When I buy these, I have to be careful when I bring the groceries in to quickly put the brussels sprout stalk away- one time I left the grocery bag on the floor for a few minutes and much to my surprise my mini-dachshund Harriet grabbed ahold of one end of the protruding stalk and made off with one of the green globes.

I generally roast these up with pancetta until crisped but in December we joined friends for a casual dinner one evening (soup and salad and gingerbread house decorating) and I thought a nice vinaigrette slaw of sorts would be a good contrast to all the heavy food around the holidays. It was and we liked the dish so much that I included it with our New Years day ham dinner.

The recipe is from a blog called Alaska From Scratch and from the write up, sounds like it is based on a recipe originally from Michael Chiarello. I love the bright vinaigrette and accents of sharp cheese. I have made this recipe both with the bacon and without (when served with the ham dinner, I omitted the bacon.)

1) Cut each brussels sprout in half and use a large butcher knife to finely chop to shred.

2) Place the shredded sprouts, almonds, cheese and bacon in a large bowl.

3) In a separate smaller bowl, whisk together the lemon and orange juice, shallot and stream in the olive oil. Whisk together until emulsified. Add salt and pepper to taste (if including the bacon, be easy on the salt.)

4) Add the vinaigrette to the salad and toss to coat. Give a quick taste to check for seasonings. Refrigerate until ready to use. Will keep for a couple of days in the fridge.