What I affectionately refer to as my "2017 Winter/Spring Collection" 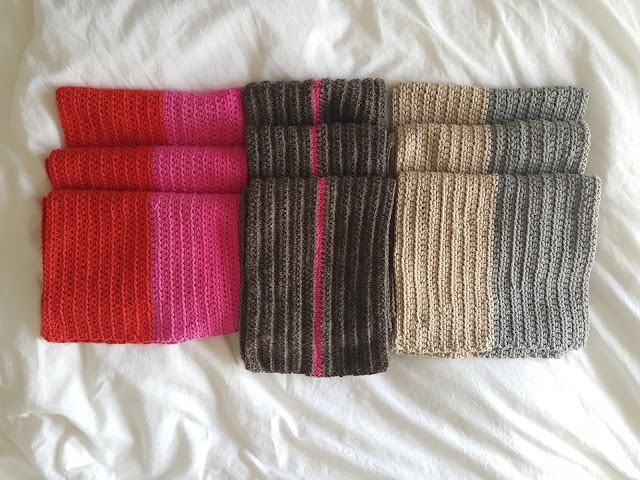 I am challenging myself to work on bigger projects. Previously, I have been doing a lot of one-off projects- things that can be completed in a long weekend- but I want to do efforts that require more planning and commitment. I want to create not only as a hobby or a stress-reliever but to feel like I am completing a piece or product. Last year I watched the documentary on Raf Simons first collection with Dior and it has stayed with me is the focus and grit it takes to put together a cohesive vision and then interpret that into a tangible. I am inspired and pulled to try to do bigger things with what I create. What I affectionately refer to as my "2017 winter/spring collection" of scarves is born out of this motivation.

The inspiration for the three scarves is around the theme of the pairing of clashing: It started with a beautiful red and pink sari on the character Sooni in the BBC miniseries "Indian Summers". The sari was worn in a number of episodes and was a beautiful cottony red and pink striped sort of print. I really loved it and it made me think about how in western fashion, I do not often see red and pink together in clothing or outfits and so I started to imagine a scarf. I wanted the two colors to curl and bend together, similar to how the sari twisted around a woman's frame. 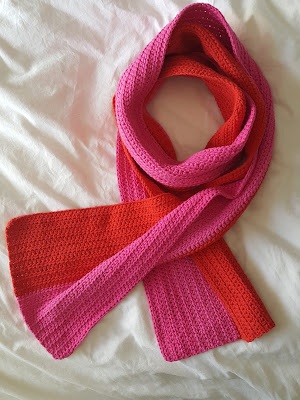 In keeping with my original inspiration, I chose a cotton yarn, and stuffed several balls of it in the rounded corners of my carryon suitcase for Thanksgiving holiday weekend with family. I have finally learned to just go ahead and bring yarn and a crochet hook with me on vacation. At home, I corral crochet hooks like flower stems in a glass jar and have so many number six hooks from various cities and towns- purchased when I finally give in to my hankering to have my hands moving, producing something, and track down a yarn or craft store.

I did not have much confidence when I started with the red- it is such a harsh uncomplicated red and I realized, if I wasn't careful, it could read as a little cheap looking. But I persisted and when I finally made it to the pink, it was such a relief. The pink is a throwback to an 80s childhood when neon or "hot" pink was a big draw for 11 year olds. I had a little of this intense pink yarn leftover and thought about how the soft brightness would play against a dark wool, a shot of color. That is when the second scarf was born. 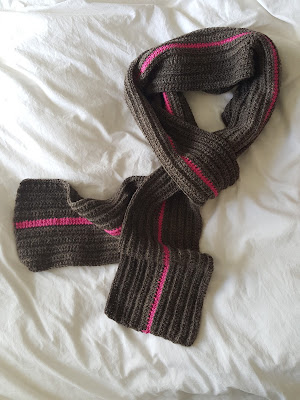 The third scarf took a more consideration: my curiosity was engaged by the idea of the pairing of clashing colors, like the red and pink, and I wanted to use the cotton denim yarn again but I could not settle on the right shades. I spent a long time standing in the yarn aisle staring- my brain scanning, adding up and evaluating pairs of colors. Khaki and gray surely cannot be together? In general, I am wary of khaki: I think back to the experience of shopping for houses and how some many had the ubiqutous warm khaki colored walls circa early 2000s house flipping. I went for it anyway and as I worked on the scarf, in my living room in front of episodes of Lost (my husband and I are watching it again since it first premiered on TV and I am loving it just as much as the original viewing) I saw how I actually have both warm brown and gray tones in my home: caramel leather sofa, nubby gray rug, etc. This caused a little meditation on how I have created my own internal rules about "what goes with what" and that I am probably best served when I jettison those dated beliefs. In nature, gray and brown are commonly together. It helps that the tones in this yarn are the right one's for pairing. This scarf turned out to be my favorite and most wearable of the three. 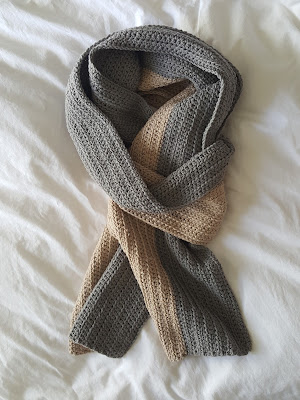 Here are some details on the scarves: 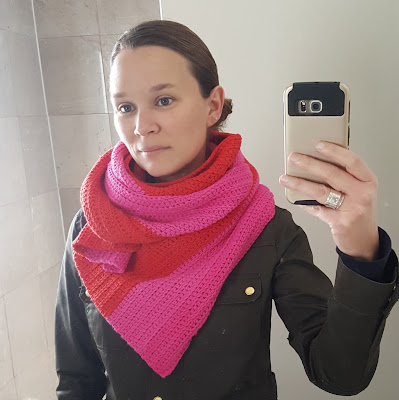 Pink/Red: single crochet, length: 84in width: 11in
(I have no idea why I look annoyed in this picture. As I was my own photographer, apparently I was annoying myself?) 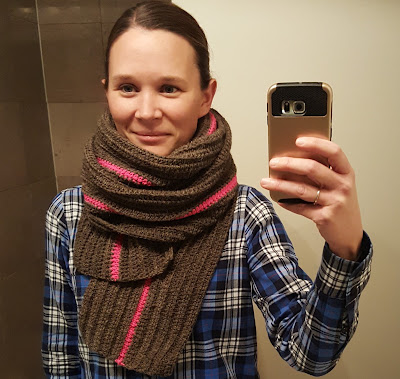 Brown with pink stripe: both brown and pink yarn are double-crochet.
length:110in width: 7.5in 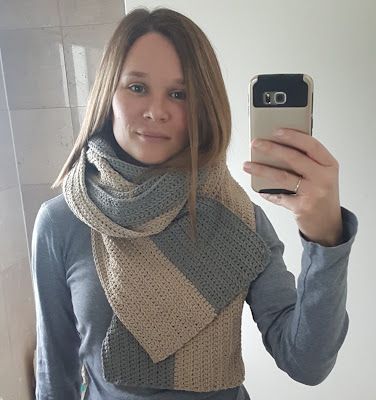 The width and lengths vary because I determine the size as I go, simply based on the feel. As I am working, I pause occasionally to loop the yarn around me to help decide when I should stop. In general, my aesthetic with scarves leans toward the oversized. In addition to the dramatic look there is a bit of practicality: the winter and early spring temperatures in Southern California are generally mild enough that a large scarf will do the trick- no jacket necessary.

As I go to hit publish on this document, it was 95 degrees today. While I wore these scarves frequently in January and February, they will not find use again until November. In the meantime, when I reach past them for the short sleeved tees and tank tops, the folded stack on my closet shelf makes me smile.