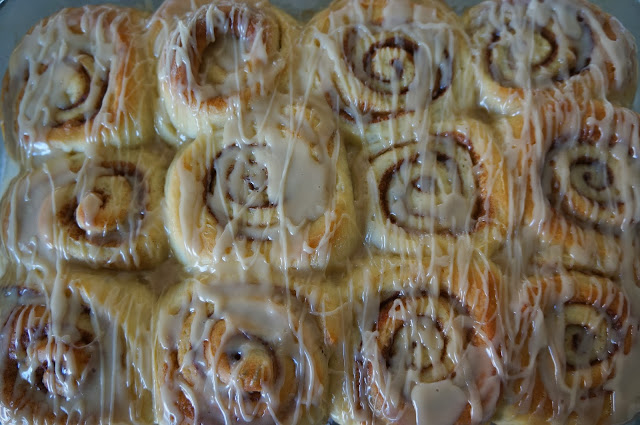 Here is the cinnamon roll that I love - the classic one that is a gorgeous puff of leavened dough, striped with cinnamon and a light glaze. It is more roll than sugary dessert and, aside from the classic swirl shape, bears little resemblance to those horrible processed, mass produced kind.

This is the cinnamon roll that I dream of when I walk into a bakery and is best with a large mug of coffee. And mug it must be as this is no dainty breakfast scone or timid tea cake.

As a kid, I remember lots of homemade cinnamon rolls for my mom's women's church group meetings. It was always disappointing to discover raisins stuffed in among the folds of sweet dough. I knew that if I made cinnamon rolls, I would never include raisins. This is a promise I have continued in my life (we get so few chances to fulfill our own childhood vows) and so the recipe below is raisin-less.

In general, I think there is a good deal of anxiety about recipes that call for using yeast. It used to be that if I read a recipe and anything in the first step included something like 'dissolve yeast', I would move right along.

But, as usual, my greed for food eventually overwhelmed my insecurity and uncertainty of dealing with yeast. As I learned, working with it is not really that big of a deal- a decent recipe will walk through it and while I may not be winning any contests at the local fair, the results far exceed any popped can product. For a friends baby shower brunch, I once made 72 cinnamon rolls. I felt it was such a nice substantial contribution to the buffet table as a homemade roll has real heft to it. (To pull it off, I was also borrowing pyrex pans for everyone I knew.)

The truly great thing about this recipe is that the last dough rising can be done overnight in the refrigerator. This means the dough and the 1st rise can be put together on a Saturday afternoon and the only Sunday morning responsibilities are sliding the pans into the oven for baking. For this reason, I would like to nominate these rolls for any New Years Day breakfast/brunch you may be hosting/attending. You can put them together plenty early on New Years Eve and when folks finally start moving about to the next morning (ahem, afternoon), there will be with this amazing, magical cinnamon smell wafting from the kitchen.  Also, please include large mugs of coffee. 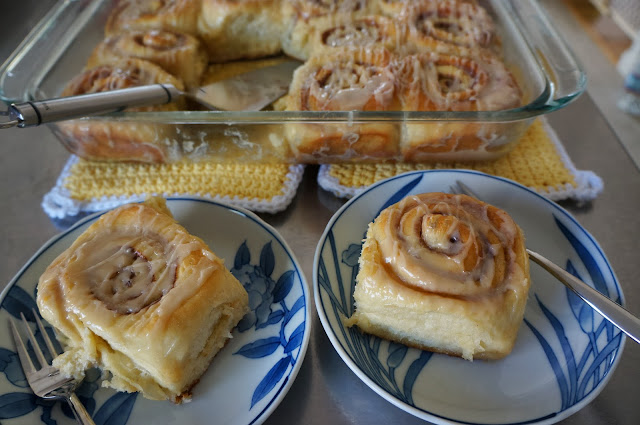 (Do you see the lovely yellow crocheted pot holders above? My mom sent me those for my Christmas stocking. I love having such personalized touches around the house. Thank you mom!)

This recipe is from Betty Crocker and makes 24 rolls

1) The very first thing is to heat and measure water in one liquid measuring cup and the milk in another. The very easiest way to do this is with a candy thermometer. These can be easily picked up at a well stocked grocery store or on Amazon. But, if you do not have a candy thermometer, you may still be able to get away with it (I think I made these for a couple of years before I had a candy thermometer)- the water temperature is basically the hottest water from my kitchen sink faucet and the milk temperature is reached after microwaving for 1 minute, stirring and microwaving again for 1 more minute. (I know- between the yeast and the candy thermometer I may have lost you by now, but once these little items are mastered a whole realm of new dishes becomes accessible!)

2) In a the bowl of mixer fitted with the hook attachment, add the warm water and then sprinkle the yeast over. As soon as the yeast hits the water, you'll start to smell it. Turn the mixer to low and add the warm milk, 1/3 cup sugar, the oil, baking powder, salt, egg and 3 cups of the flour. Beat until smooth (may need to kick the mixer speed up by one notch for just a little bit.)

3) Start adding the remaining 3 1/2 to 4 1/2 cups of flour- one cup at a time. As soon as the dough is easy to handle (not too sticky, has come together in a ball), dump the dough out onto a well-floured surface. Then, knead the dough for about 10 minutes until smooth and elastic. Basically the smooth and elastic means the dough doesn't have large floury shaggy bits. 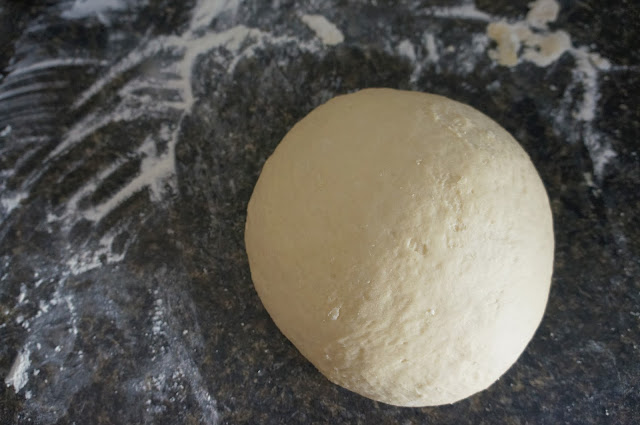 4) Butter a large bowl and place the kneaded dough inside. Take care to sort of roll the dough in the butter and then turn the buttered side up. Cover it with a clean dish towel and let it rise in a warm place about 1 1/2 hours or until it doubles in size. (Growing up, this is where my mom would put the dough on a kitchen stool in front of the fire place. I usually put it near a warm sunny window- not in direct sunlight, but by the window that has the most heat generating from it.) The dough will be ready if when you poke it with a finger, the indentation remains.

5) Sometime while the dough is rising, mix 1/2 cup sugar with the cinnamon. Also, just before the dough is ready, prep your baking pans. I butter two 9 by 13 pyrex dishes for the rolls.

6) Wrestle the risen dough from the large bowl onto a lightly floured surface and divide it in half. Use at first your hands and then a rolling pin to flatten one of the dough halves into a rectangle approximately 12 by 10 inches. Take 2 tablespoons of butter and spread over the dough. Sprinkle evenly (as best you can), half of the cinnamon sugar mixture. Next, roll the dough up, starting with the 12-inch side. Once you've reached the end, pinch the edge of the dough into the roll to seal it up. Gently stretch and shape until your roll is even.

7) Cut the roll into 12 slices and place each slice slightly apart into 3 rows of 4 on the pan. I have terrible spatial reasoning and the easiest way I have found of evenly slicing the dough is to first cut the dough roll log in half - then, each of those halves need to equal 6 rolls, so I cut each half in half again. Now I have 4 mini dough logs and I just cut each of those into thirds.

8) Repeat steps 6 and 7 with the 2nd half of the dough. Once both pans are done, wrap with aluminum foil. Refrigerate at least 12 hours but not longer than 24 hours. (If you're ready to bake immediately and do not want to leave in the fridge overnight, do not wrap the rolls up. Let the rolls rise in the pans in a warm place for about 30 minutes or until double in size.) 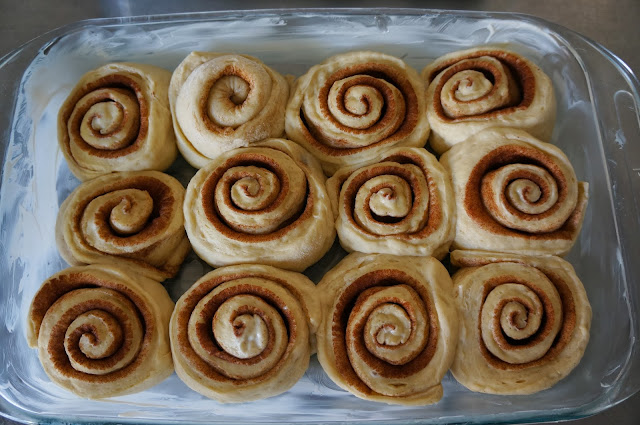 9) Heat oven to 350 degrees. Remove foil from pan and bake 27 to 30 minutes or until golden. Remove rolls from oven and frost with powdered sugar frosting while warm. 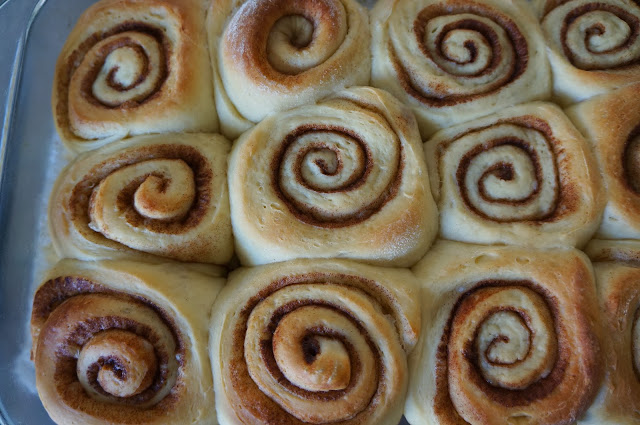 Whisk all of the above ingredients together until smooth. I like the addition of maple syrup to the glaze but not everyone does.

Posted by Nichol at 7:56 AM No comments: