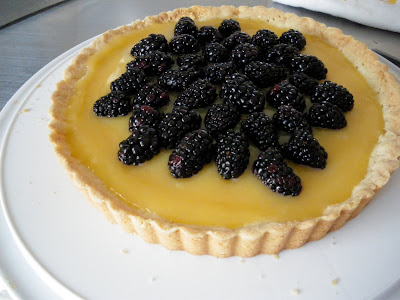 This is gorgeous and simple. I have brought it out for a number of events and people always love the combination of the lemony curd and the buttery crust. I love it because the crust can be made well in advance and the lemon curd and berries are just assembled at the end.

These pictures are not too fantastic and simply do not do it justice. My excuse? This tart was mere seconds away from having the lid of my cake carrier snapped over it in a rush to get out the front door for work.

Do I think homemade lemon curd is better than store bought? Absolutely. However, when pressed for time, energy and plain sanity, there are a number of lovely options at the store. My personal favorite is Trader Joes lemon curd. (It made a memorable appearance here.)

The shortbread tart crust recipe is from the Barefoot Contessa.

1) Preheat the oven to 350 degrees. In the bowl of an electric mixer fitted with the paddle attachment, mix the butter and sugar together until they are just combined. Add the vanilla. In a medium bowl, sift together the flour and salt, then add them to the butter-and-sugar mixture. Mix on low speed until the dough starts to come together.

2) Dump onto a surface dusted with flour and shape into flat disk. Press the dough into a 10-inch round or 9-inch-square false-bottom tart pan, making sure that the finished edge is flat. Chill until firm.

3) Butter one side of a square of aluminum foil to fit inside the tart and place it, buttered side down, on the pastry. Fill with beans or rice. Bake for 20 minutes. Remove the foil and beans, prick the tart all over with the tines of a fork, and bake again for 20 to 25 minutes mores, or until lightly browned. Allow to cool to room temperature.

Note from Ina: The tart shell can be baked a day ahead, and the tart can be assembled a few hours before serving. Never refrigerate a baked shell or a finished tart. (Ina is very correct about not refrigerating a baked shell. It gets very tough and seems to pick up every flavor in the fridge and not in a good way.)

4) Spread the tart with the lemon curd (about 3/4ths of the 10.5 ounce jar) and arrange the blackberries on top in whatever fashion you fancy. Sometimes I like a nice neat pattern, other times a shimmery jumbled heap of jeweled fruit. Serve immediately. 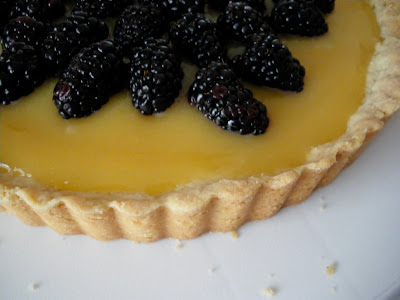 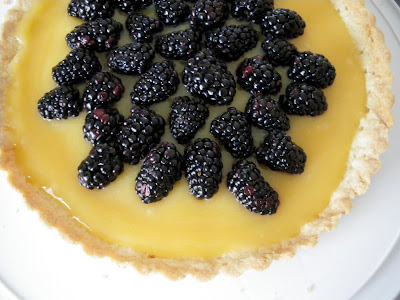 Posted by Nichol at 8:47 PM No comments:

I hope you find yourself surrounded on Easter with those you love.
If you're in need a little last minute Easter celebration meal inspiration, I submit the following:

I think these would be quite charming on an Easter table.

It would not be Easter dinner if I wasn't peeling 10 pounds of potatoes to make this.

This has been a regular go-to spring dessert and the tart crust can be made in advance.

Finally, some bits of leftover ham and Easter dinner veggies could find a new purpose in this dish. 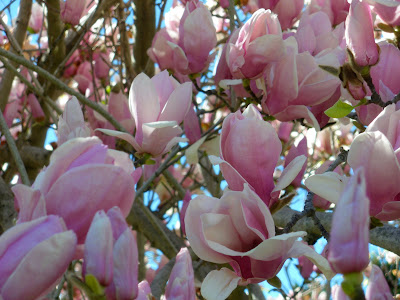 Posted by Nichol at 3:05 PM No comments: 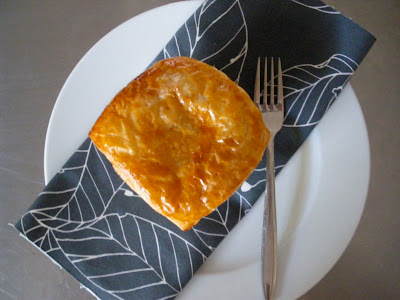 Chicken pot pies were a big deal when I was a little girl. They were generally only served when my parents were going out for the night and we were left in a babysitters care. My mom would pop them out of their individual cardboard boxes and into the oven before she started to get dressed up for the evening. It was actually pretty genius of her because we were so obsessed with them, it distracted us from the fact that our parents were going some where without us. They were of course the premade, frozen kind. But we could not have cared less. We loved the buttery crumbly crust and savory gravy.
A couple years ago, I attempted a homemade chicken pot pie and it did not turn out so well. It made me pot pie shy and I have not attempted once since. One of the joys of learning to cook is revisiting a recipe that was a previous failure only to see how my own skills have grown. This recipe was such a success I feel that I have to share it.
The recipe originally is for chicken pot pies but the ones pictured are all vegetable. I have a good friend who showed up at my doorstep the day before with a sack of fresh gorgeous veggies from her garden, including some lovely little turnips (see below- isn't it pretty?) I quite like turnips and they found a nice home in these pies (along with some diced butternut squash, shallot, and peas.) 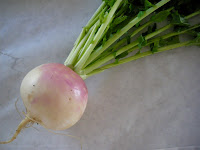 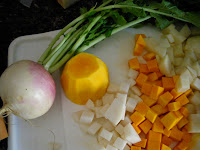 2) Add wine; simmer until reduced by half, about 2 minutes. Add stock; bring to a boil. Add thyme and peas. Season with salt and pepper. Add cornstarch mixture and cream. Bring to a simmer; cook until thick, about 5 minutes. 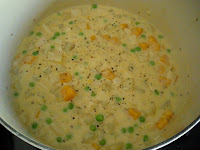 3) Divide mixture among four 6-ounce ramekins; top with pastry. Brush with egg. Cut a hole into each to vent. Bake on a baking sheet until golden, 12 to 14 minutes. 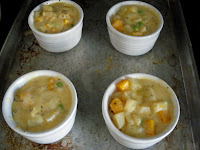 4) When finished baking, wallow in their delicious adorableness! 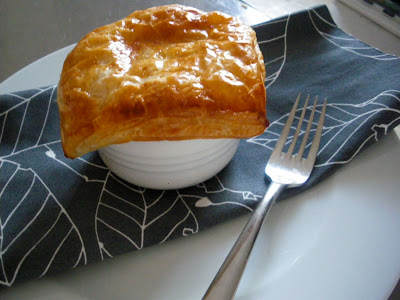 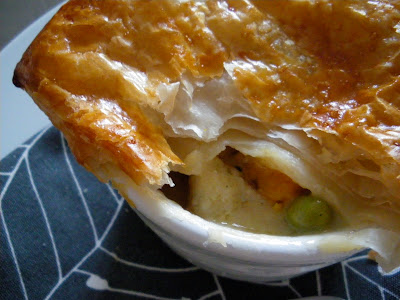 Posted by Nichol at 3:02 PM No comments: