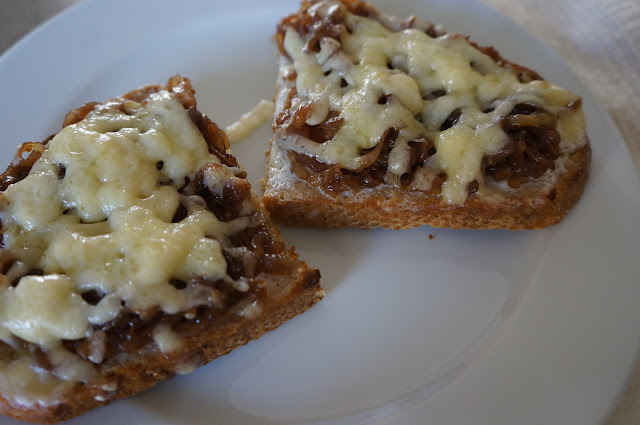 Whenever I start a dish by making caramelized onions, I clearly recall one of my more difficult days:

A little over 3 years ago, we bought our first home. It is a townhome, really, but it is the first space we have ever owned. After months of searching (God bless our patient realtor), we found a space we love. It is light filled, in a quiet community with a great neighborhood, and the back half faces an empty hillside. It affords us quite a bit of privacy, which in our price range, feels unimaginable.

On our first visit, when we were standing on the front steps, while our realtor fumbled with keys, my husband and I both felt "it"- that moment when you feel yourself tumbling towards love. It surprised us how quickly we knew this is where we wanted to live.

Like all good things you make an enormous commitment to (in this case, via a mortgage), that thing quickly disappoints you. After you fall in love, you really get to know one another and, for me, the first 9 months of homeownership were heartbreaking. How could my lovely home betray me with uneven floors, a drippy faucet, etc ?! I was in awe of my friends, who for all this time had owned homes and walked around like it was no big deal. And those who had remodeled homes? I looked at them with complete reverence and respect. I could not even imagine the task.

(This would be a good point to clarify that while the homeownership transition was very rough for me, my husband managed just fine. He became bff's with the folks at our local Lowe's, installed all of our appliances, valiantly battled an unwanted skunk tenant (a good story for another time) and what he did not know how to do, he learned.)

The whole house had wood laminate flooring (if you think that sounds nice, I can assure you, it wasn't. We think whoever put it in was drinking during installation.) Early on we knew we wanted to add carpet to the back bedrooms and after about 5 months we had the cash saved up to do so. Right after Christmas, I picked out stunning white berber carpet (still the most beautiful mistake I ever made.) The carpet installers were scheduled to arrive 4 days later. To save money, the day before, my husband and I did all of the prep work ourselves- pulled the furniture out of the two bedrooms and yanked up the floating wood laminate flooring.

We had been aware for some time that there seemed to be a bit of water damage in the second bedroom below one of the windows. We thought it was owing to a poor seal on the outside window frame and so we caulked (by we, of course I mean my husband) the heck out of the window and over Christmas break, my husband and my father-in-law replaced the damaged sheetrock, etc on the inside. So, we had already been through a couple of rounds on this room. The night before the carpet was to be installed I went to sleep believing the next day the room would be carpeted and that would be the finishing touch.

We slept in the living room on our mattress that had been relocated in preparation for the carpet installation. It poured rain all night long and I worried a bit about how the carpet installers would manage. Around 6am, my husband turned to me and asked, "Do you hear that- that dripping noise?" I told him, of course I heard a dripping noise, it was raining. He was not dissuaded and got up and started marching around. I then heard him go into the second bedroom and let out a low curse. It is was in the tone that I now know all homeowners recognize as the tone of "something is wrong and it will be difficult and expensive to fix." What he found was a pool of water at the bottom of the window- inside. The window had probably been leaking since we bought the home, but the wood laminate flooring was soaking it up. We only saw it because the flooring had been removed. (In hindsight, the fact that it rained that night was an enormous blessing. If the carpet had been installed before the issue fully discovered, the damage would have likely continued longer. But in the moment, it was small comfort.)

We were devastated. It was still raining terribly, and as it was a second story window, going up on roof to tarp it up was out of the question. My husband called the carpet installers to let them know they would just be installing carpet in the one bedroom. We moved a couple of electric fans in to try to keep the space dry and then spent the next few hours, until the installers arrived, moving wordlessly about the house, trying to keep ourselves busy so as to not think about the thing that we had no control over. I remember feeling very brave for not crying.

When the carpet installers arrived, to keep out of their way, I ended up in the only room in the house that did not have furniture remnants of all the other rooms stacked in it- the kitchen. We had to eat and, as it was a cold rainy day, I decided to make some soup. I put together a sort-of french onion soup. It was helpful to be engaged in something and as caramelizing onions takes a bit of time, a good task. I stood there feeling so disappointed and more than a little sorry for myself. My only point of comfort was I kept reminding myself that someday this will all be fixed. I had recently read the good advice that whenever faced with a difficult circumstance, imagine what the 75 year-old version of yourself would say to you. My inner 75 year-old is very nice about such things. So, we had french onion soup and the new carpet in our one bedroom looked just beautiful.

I would like to tell you we were able to fix the window leak in the second bedroom in a few days and it did not involve my husband putting on rock climbing rope and harness to get up on the roof, or several weeks of back and forth unsuccessful repairs and a second leak did not appear and it did not eventually require the entire replacing of the window and a major portion of the outside front siding of our house and trim. But it did.

And now, every time I make caramelized onions I think of how, even when you fall in love, expectations do not often match reality and how, in spite of those momentary crushing disappointments, life goes on. And I think of how much I love my husband and our dear friends, family, the construction workers- everyone who had a piece in fixing it all.

So, I guess, when I make caramelized onions, I do not just think about one of my more difficult days, I really think about how lucky I am to have love.

caramelized onion jam tartine
(This is a great lunch or quick pre-dinner appetizer. Friends say it reminds them of french onion soup.)

1) Set the oven broiler to high and move the oven rack to the highest setting so it is directly underneath the broiler.

2) Place the bread on a cookie sheet and toast in the oven under the broiler. Each side takes maybe 60 seconds. Be sure to watch the bread so it does not burn.

3) When the bread it toasted, let it cool ever so slightly. Spread each piece with about 1 tablespoon mascarpone. Top each slice with about 1/4 cup of the onion jam, more if you like. Scatter first the gruyere cheese evenly on the slices, then the parmesan.

4) Pop the dressed bread back under the broiler until the cheese is bubbly and just beginning to brown. Please give it just a second to cool before diving in. (If serving for an appetizer, I cut into neat rectangles for easier munching with pre-dinner drinks.) 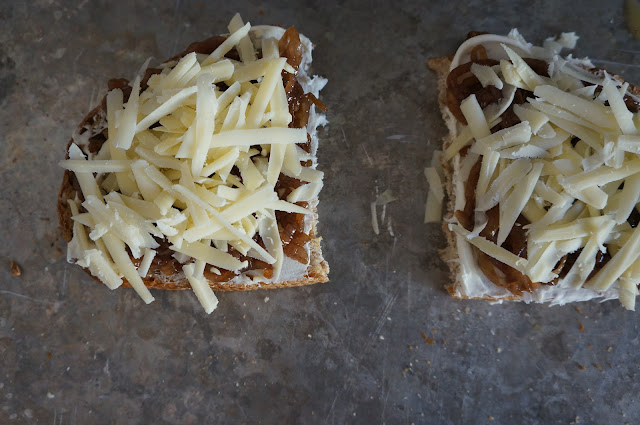 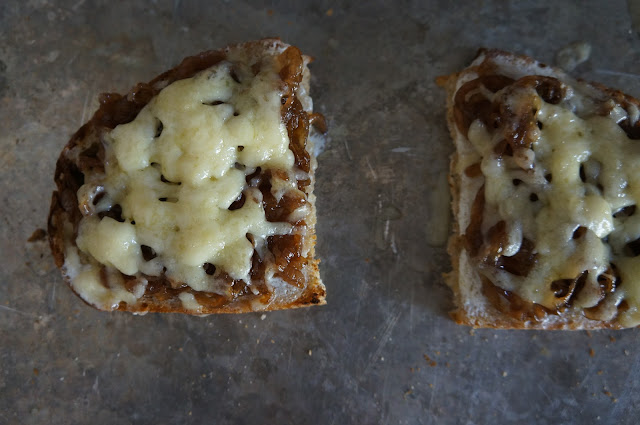